Warning!
There are currently technical problems on the website for ordering process. If this is the case for you, please contact me by email. We will find an alternative as soon as possible.

The spinning top, or simply top, has been around for thousands of years. It is one of the oldest recognizable toys found on archaeological sites. Spinning tops originated independently in cultures all over the world and were not only used as toys, but also in games of chance and for divination.

One of the oldest known predecessors of the spinning top is the four-sided “Dreidel”, inscribed with Hebrew letters. Spinning it is a popular game traditionally played during the Jewish holiday of Hanukkah. In Mexico people played with the “Perinola”, a 6-sided, wooden spinning top, while in Japan the “Beigoma” was very popular during the Edo period. It has a disc-shaped metal top around which a string is wound. It is considered the inspiration for the internationally successful manga series “Beyblade” in the 2000s, in which young people battle it out with spinning tops. The series was accompanied by a spinning top battle game of the same name, which became one of the world’s most popular games for many years.
There is even an official international top spinning competition – The World Spintop Championships.

Majid Karami‘s spinning tops are all lovingly hand-crafted originals made of wood, which can be used in many different ways. They are artistic objects, wonderful high quality toys and can even aid meditation and relaxation. Why not give it a try!

Our spinning tops are made of a variety of different materials, mainly different types of wood, including acacia, Brazilian walnut (ipe wood), maple, beech wood, walnut, ebony, padauk, wenge, etc., and metal (aluminum, copper , brass, etc.). Our tops are well-balanced, ensuring smooth rotation. You can spin these tops in two different ways: either by hand or with the help of the spindle and the string provided.

Each top is completely hand-made from 100% natural materials. We do not use varnish. Instead, we finish our products with natural oil and wax.

Your purchase is risk-free: if your are not satisfied, you can return your purchased items for a full refund. For purchases over € 35, we pay the shipping cost to destinations in Europe. Your items will be shipped 10-20 days after we receive your order, at the latest

Our special boxes are made out of fine wood, such as walnut, maple, oak, etc., and can be used as decorative containers or stands. 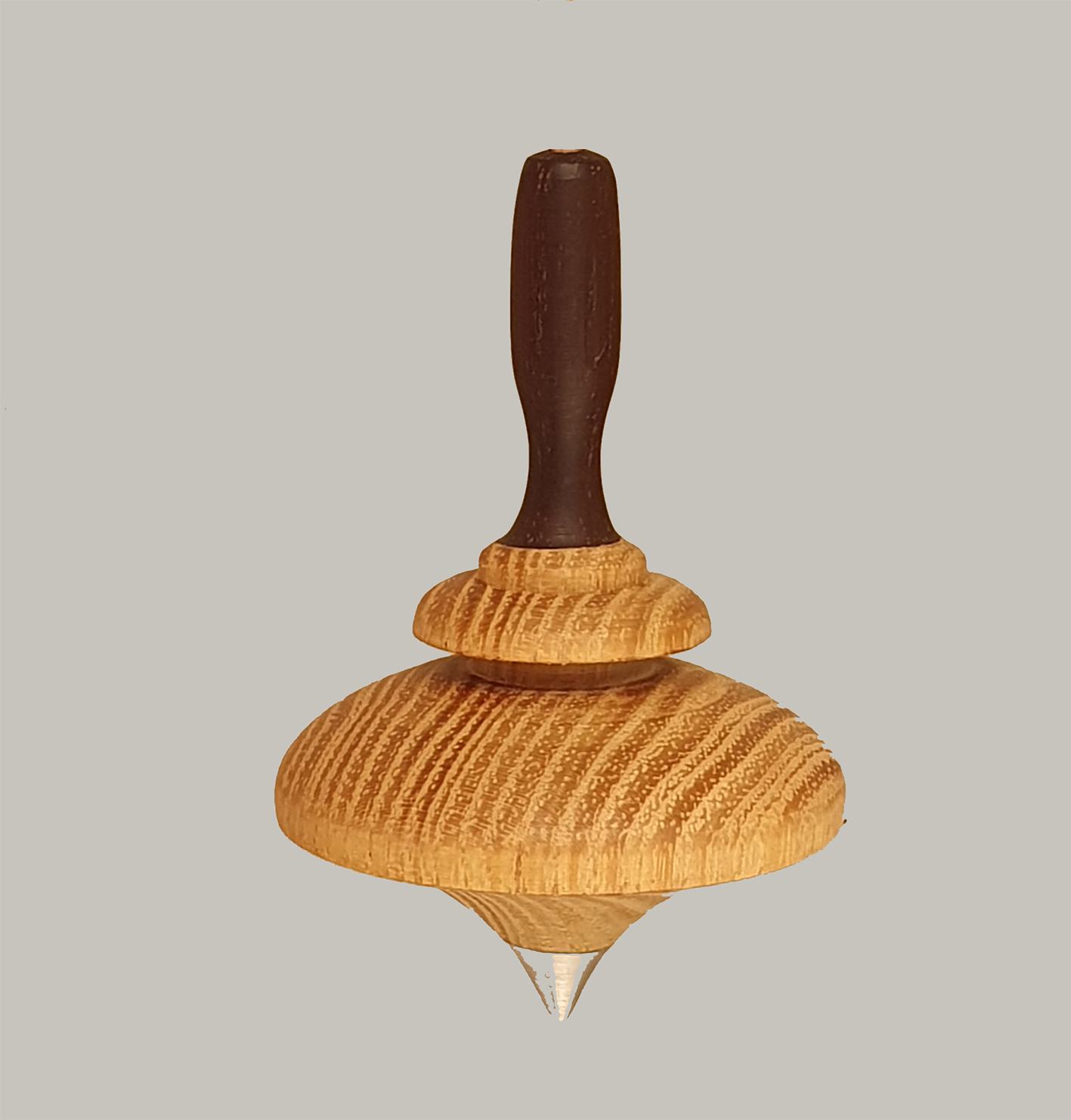 If you ask older people what they remember most about their childhood toys, you will hear a variety of simple types of nostalgic ones. Among a variety of them, there is one that most children play with at some point in their lives.

This toy has been around for thousands of years. Intended to turn on itself as long as possible, balanced on its top, it entertains children and serves as an anti-stress for adults.

This tiny toy comes in a wide variety of shapes and colors, but its function remains the same in all varieties. Whether you spin the top with your fingers or hold the top upright as you pull a rope to throw it, the top spins quickly, miraculously standing for a long time before wobbling and falling back.

The Physics of the Spinning Top

If you ask a physicist how a spinning top toy works, you will receive a fascinating and long explanation. However, let us look at some of the basic forces that make optimal rotation, without getting into advanced physics and mathematics.

When we use our fingers to throw a spinning top, we give the top a force that converts its potential energy into the energy of motion.

Something that spins, will keep spinning if there are no other influences. As the top spins, it balances on its fine point, which minimizes the amount of friction generated by its contact with the surface on which it spins.

Which material is used to make a spinning top

Like many traditional toys, such as ball games, the old-fashioned spinning tops were made of clay. Later, wooden spinning tops appeared around.

Majiddrums spinning tops are all passionately and skilfully handcrafted out of different types of wood and metal. Being among the best spinning tops, they are fantastic high quality toys, which can even help us to meditate and relax, at home or at work, while taking a short break.

To play alone or with friends, spinning tops are ideal as small gifts for birthday parties.

Spindle is 100% handcrafted and is made of fine wood and aluminum. The delicately carved handle helps us make a rapid twist for an optimal rotation. Watching the balanced rotation makes us improve our concentration, what we need the most in our daily life full of distraction. 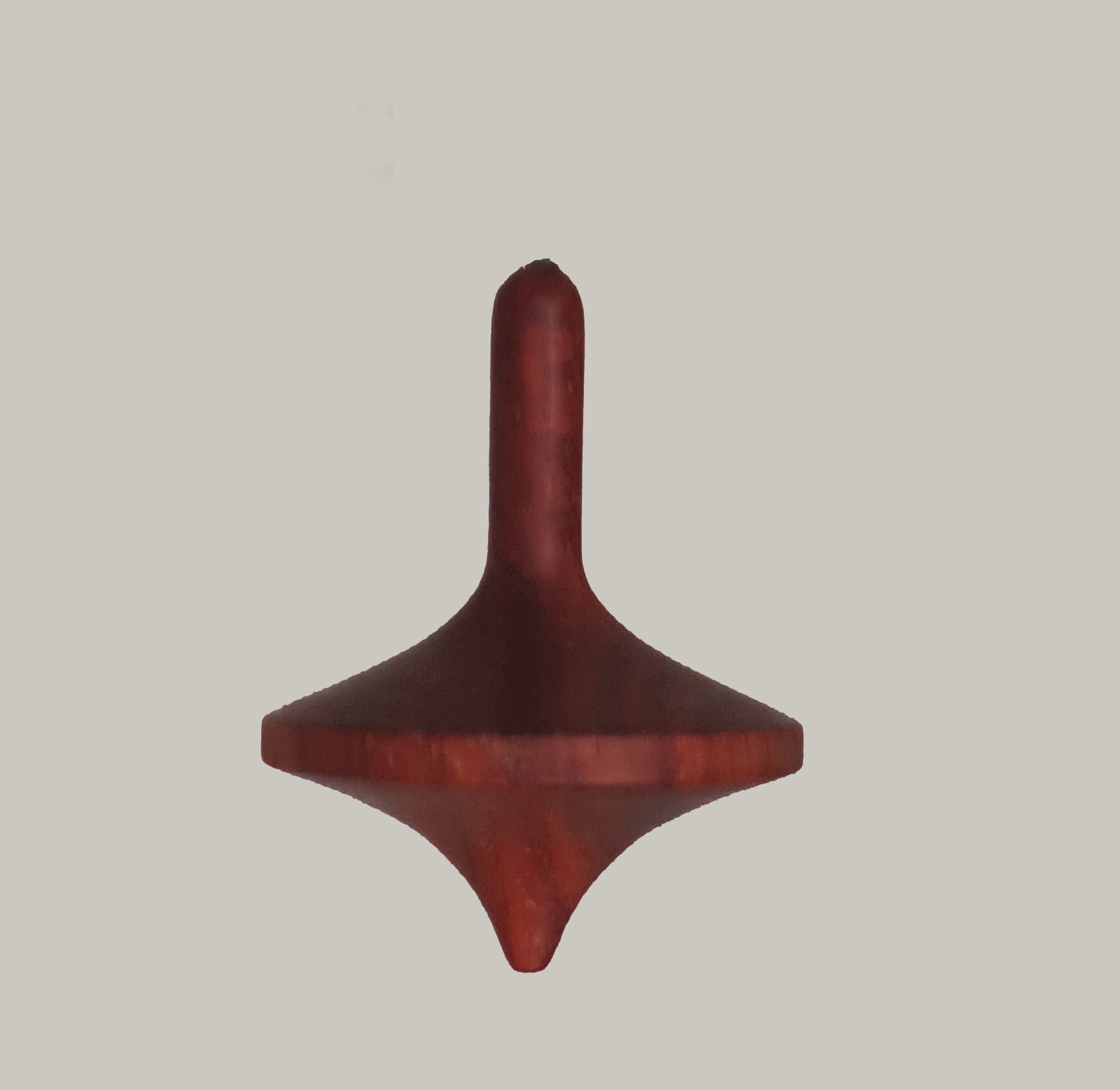 For some people, the top symbolizes the axis of the world on which the terrestrial globe rotates. In fact, the rotating movement of a spinning top evokes balance in a moving universe.
The spinning top seeks its balance on its axis. It seems to have eternity in front of it, but it gradually loses speed, exhausts itself and finally, stops on the ground, overcome by its mad race against the physical forces, which govern our Universe. That is exactly like our life cycle.

These educational toys will make you discover and observe the gyroscopic force and different movements of the center of gravity. These are caused by the frictional forces between the tip of the router and the ground. The law of solid friction states that for two dry solid surfaces sliding against one another, the magnitude of the kinetic friction exerted through the surface is independent of the magnitude of the velocity of the slipping of the surfaces against each other.

A stress relief toy for adults

Spinning top is an ideal toy for reducing stress, anxiety and boredom. Just place the handle of the top between thumb and forefinger and simply twist it, then watch how fantastically it rotate. This rotation helps the people to concentrate and to overcome distraction.

These tiny wooden spinning tops are surprising unusual gifts both men and women, adults or children. It also serves as a competitive game for two or more persons.

Pendel is 100% handcrafted and is made of solid Padauk. The outward appearance is delicate but it is strong inside. When you are embarrassed, distracted or tired, just make a rapid twist to see how it rotates tirelessly, giving you a relaxing sensations. 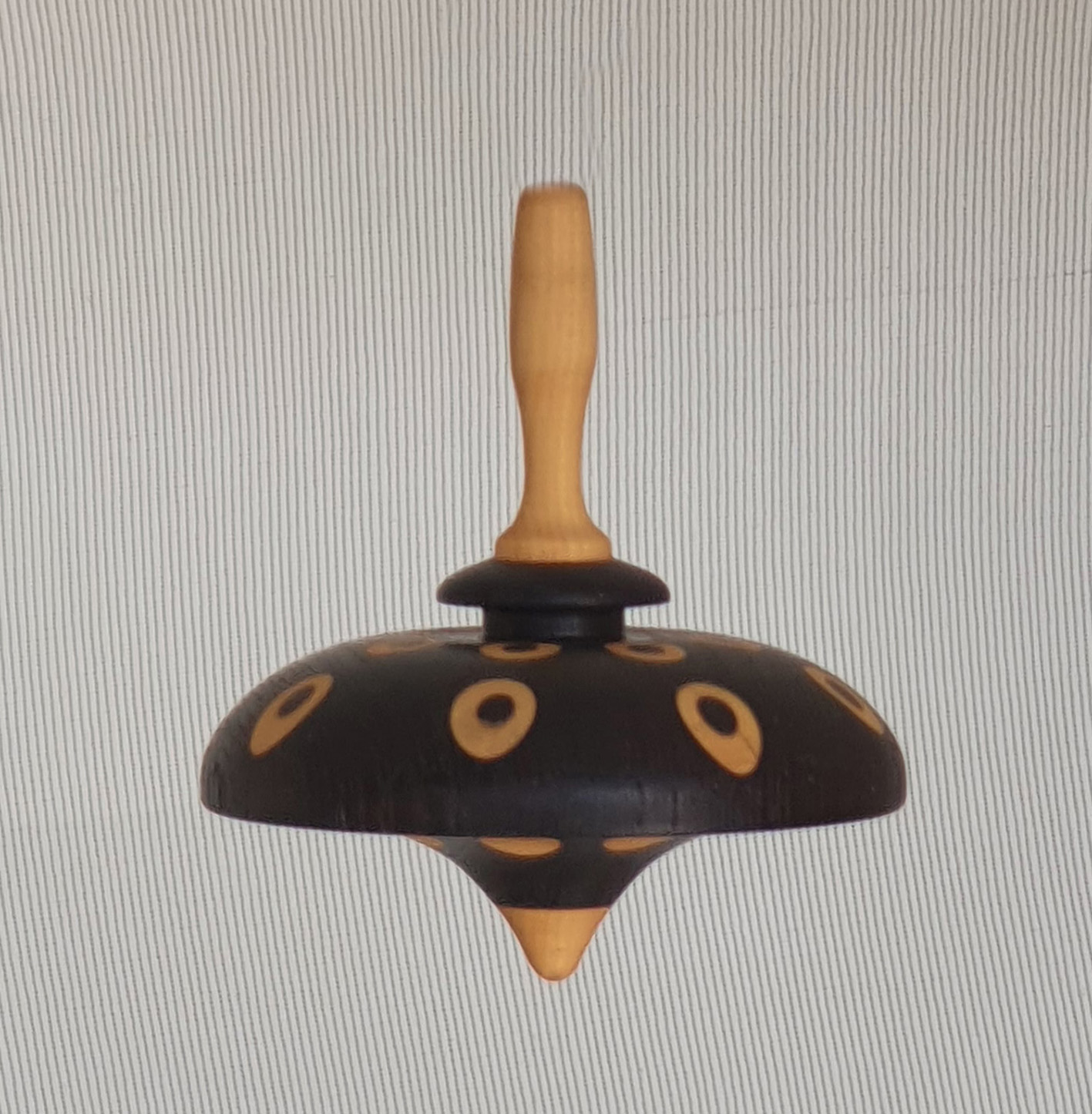 Peacock, the symbol of peace, immortality and beauty

Every culture has its own stories and interpretation on different issues. Peacock motifs are seen everywhere. In all cultures, the Peacock is the emblem of beauty and prosperity, which is expressed by its colorful plumage. In some countries, such as India, the peacock is the symbol of immortality as well. In the ornaments of architecture and art deco that are so often found in different countries, it appears as a symbol of elegance and an art of living.

Considering this popularity, there is no coincidence that Majiddrums has also been inspired by the ornamental motif of peacock feathers and used them in his artistic designs.

When you look at this delicately carved wooden spinning top, you have the impression that a colorful peacock is dancing in front of you, proud and glorious.

You will marvel at the patterns as you hold this hand-made top in hand and look at it from different angels. The motifs have different shapes above and below. At the top, they are hollow, at the bottom filled. Its structure is amazing and you wonder which tools are used to make it and how the idea of ​​making such a high-quality wooden top was formed in the mind of its creator.

Playing tops spinning is just a matter of practice. You can spin the top with your thumb and forefinger or hold the top upright and pull a rope to throw it. This operation of a wooden spinning top with rope is a game that requires a little practice.

Hypnotizing, this scientific toy is an original gift to discover optical illusions. Spinning top with optical effect to animate a children’s snack or as birthday games.

Peacock is 100% handcrafted and is made of solid Ebony, Wenge and Buxus. The delicately carved peacock feathers motifs make it look more decorative. 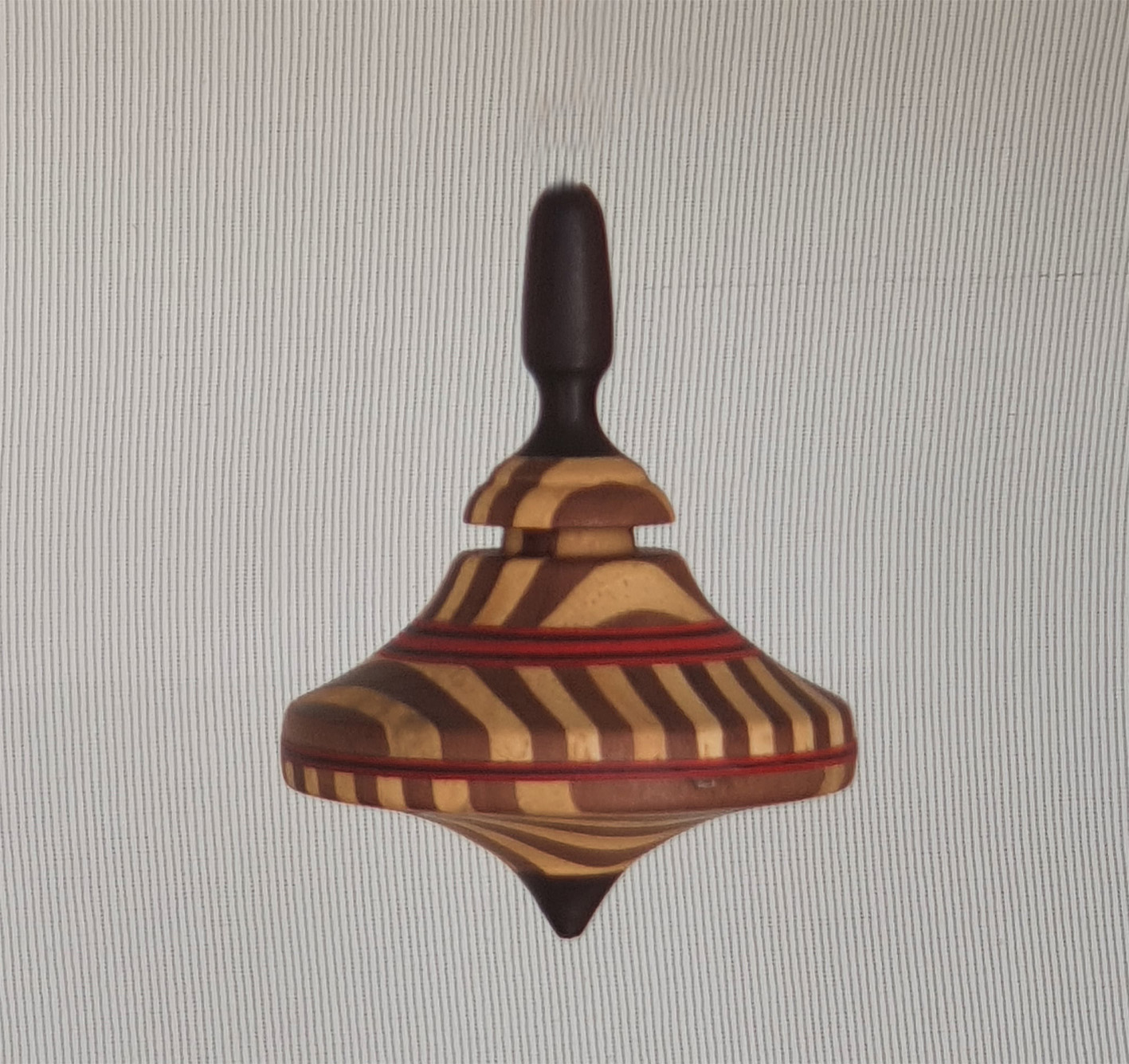 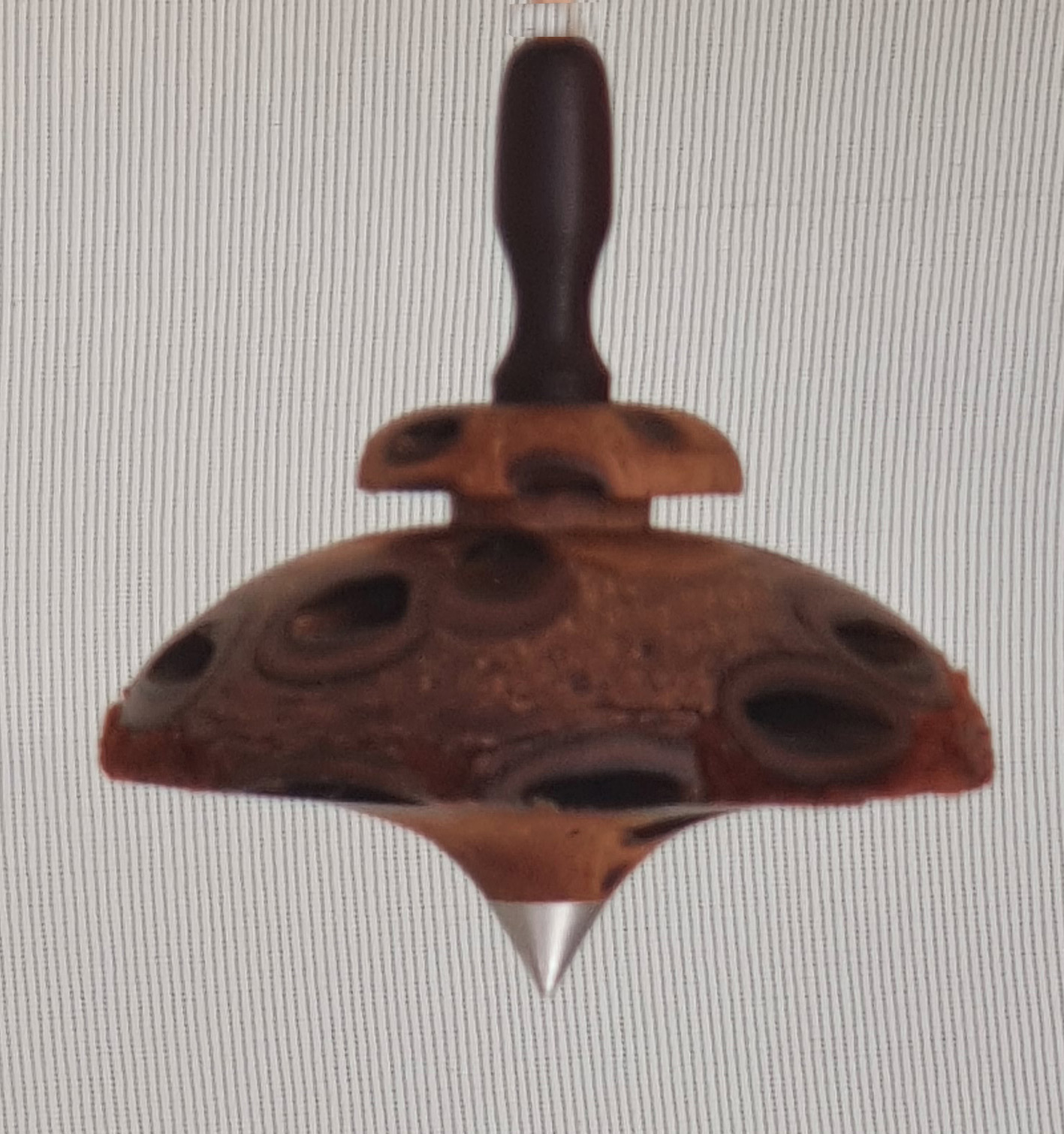 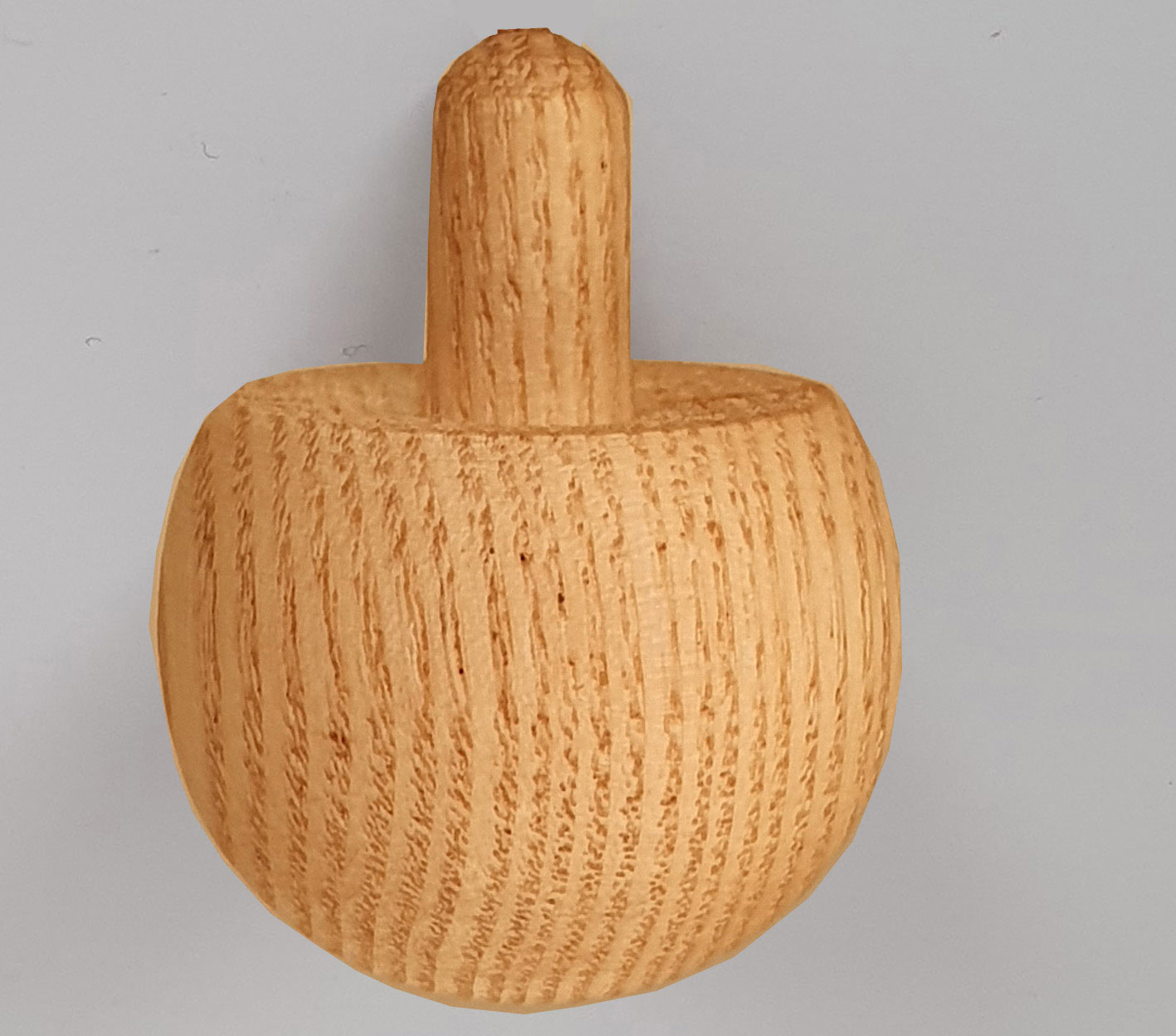 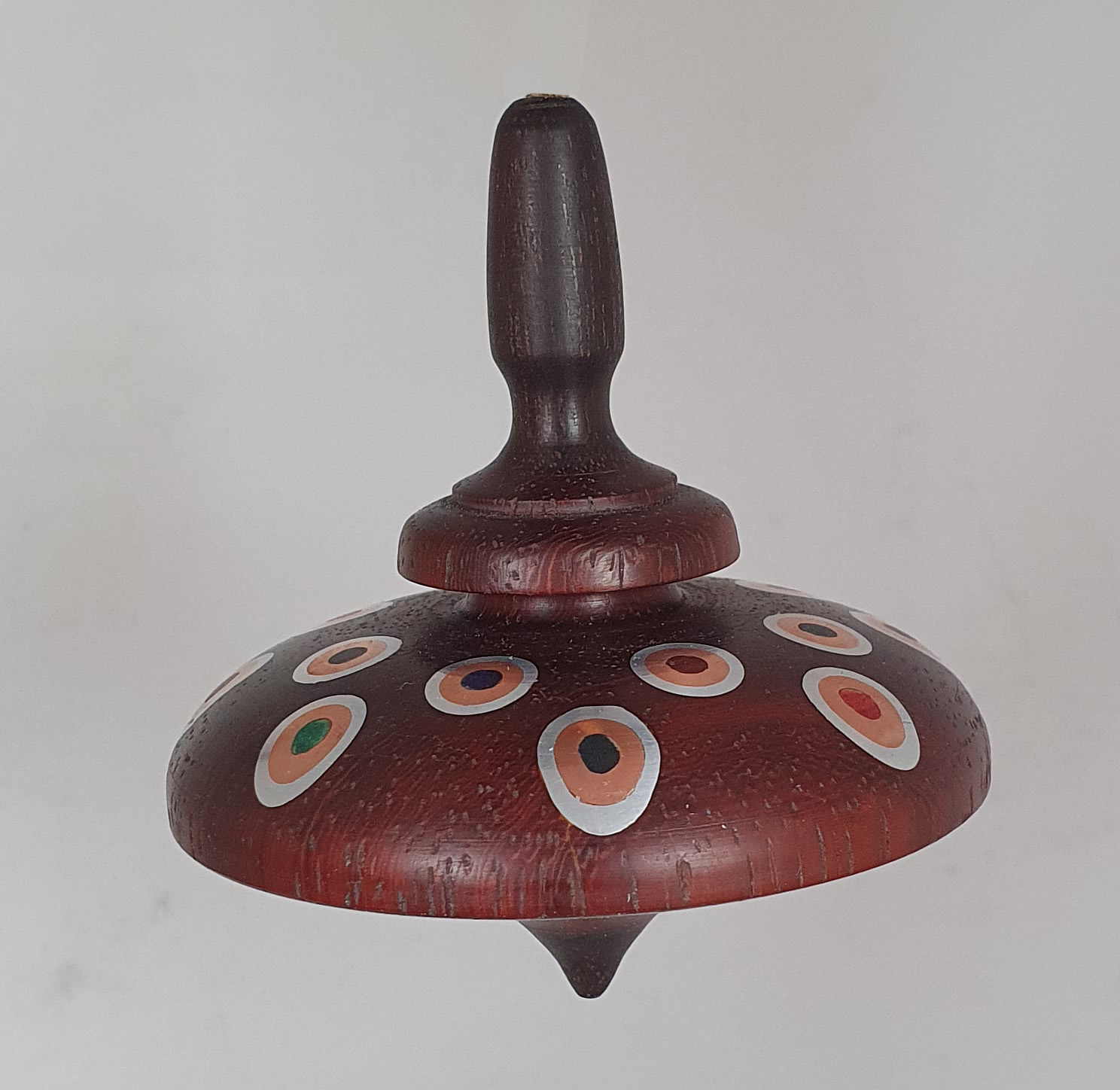 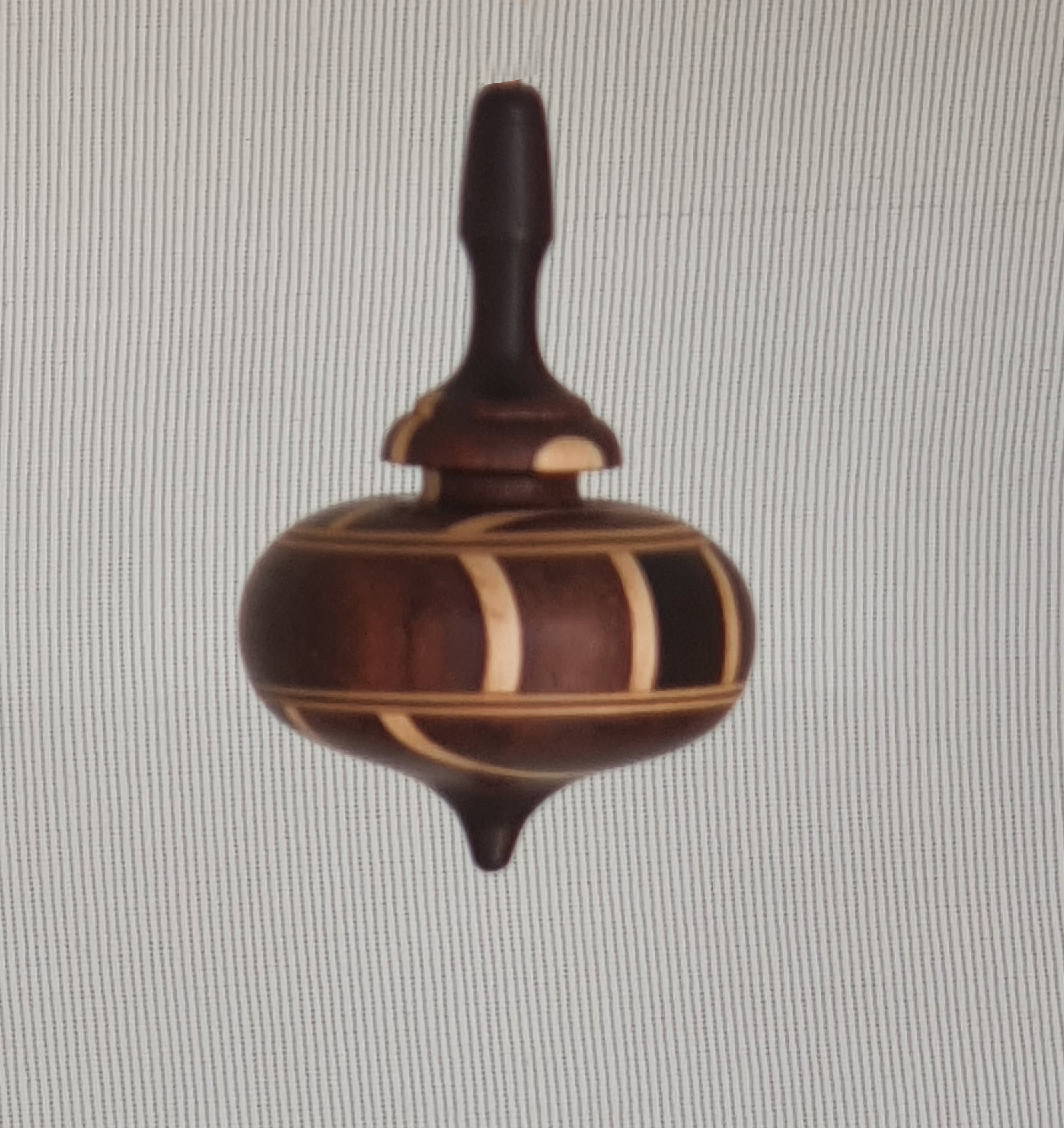 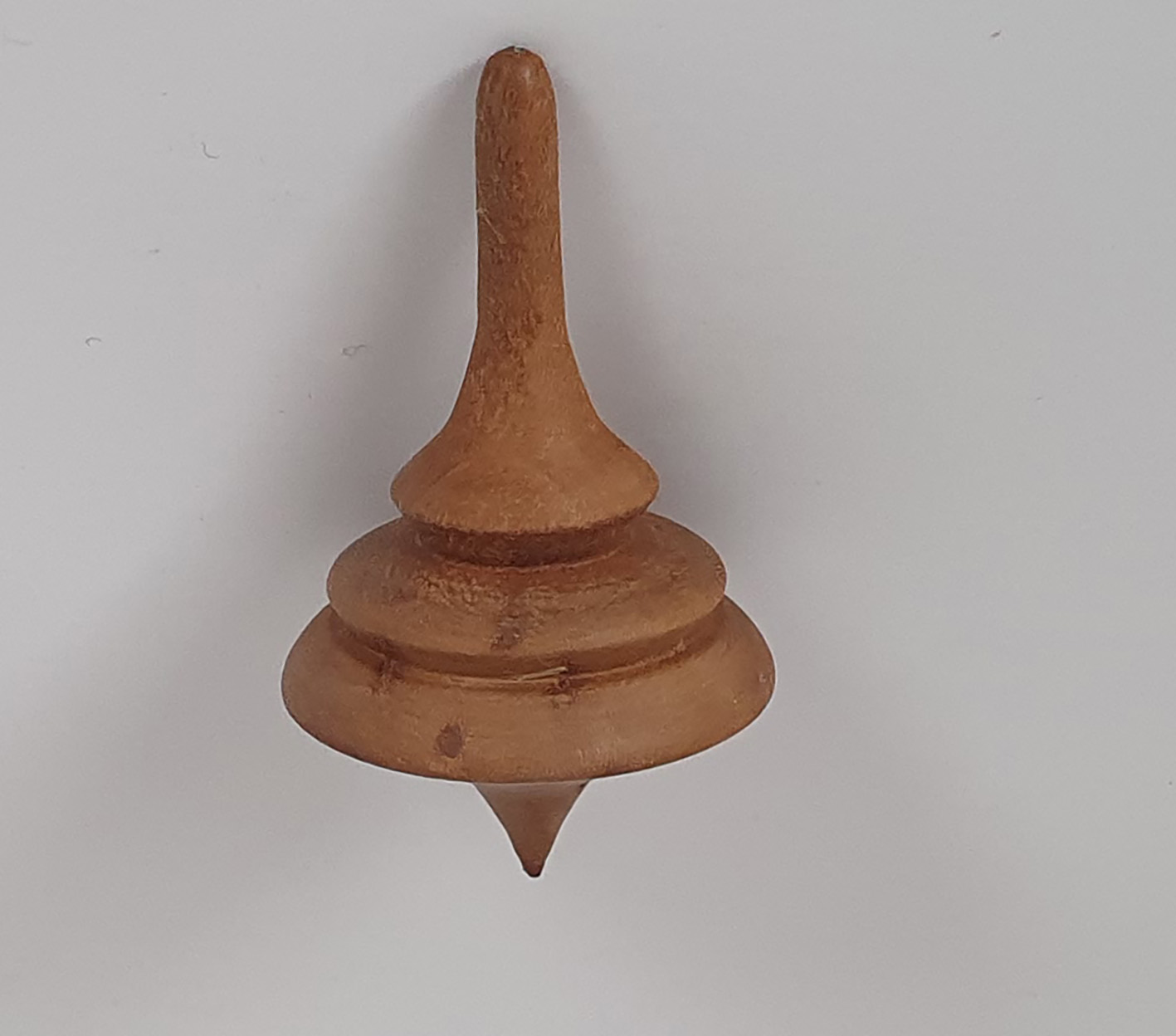